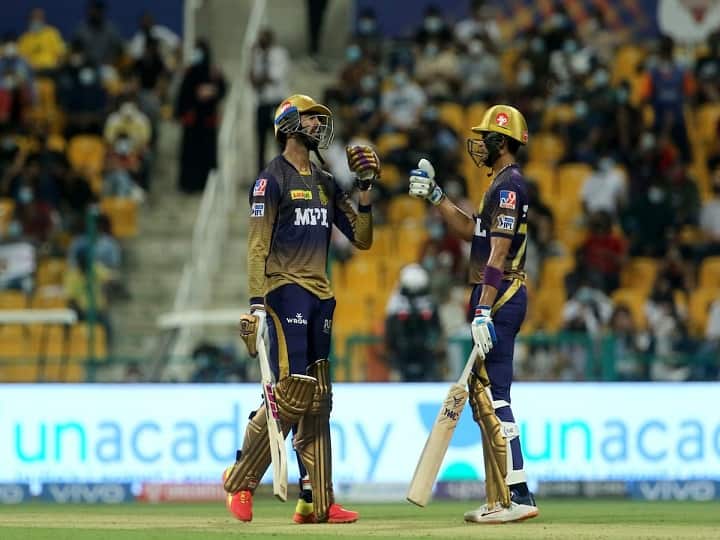 
IPL 2021: Kolkata Knight Riders (KKR) registered a spectacular 9-wicket win against Royal Challengers Bangalore (RCB) in the match played at the Sheikh Zayed Stadium on Monday. The target of 93 runs given by Royal Challengers Bangalore (RCB) was achieved by the KKR team at the loss of 1 wicket in 10 overs. With this, KKR’s team registered a spectacular victory by 9 wickets.

For Kolkata Knight Riders (KKR), Shubman Gill played a brilliant innings of 48 runs in 34 balls. During this innings, he hit 6 fours and 1 six. Apart from this, Venkatesh Iyer played an inning of 41 not out off 27 balls. During this innings, he hit seven fours and one six. After Gill’s dismissal, Russell came to bat but he did not get a chance to play a single ball. Because after this Venkatesh gave KKR victory by hitting three consecutive fours. Yuzvendra Chahal got the only success from Bangalore. Who dismissed Shubman Gill. Chahal took one wicket for 23 runs in 2 overs.

Bangalore reduced to 92 runs
Kolkata Knight Riders (KKR) bowled out RCB for 92 runs in 19 overs in the 31st match of IPL 2021 on the back of the superb bowling of Varun Chakravarthy (3/13) and Andre Russell (3/9). After winning the toss, Virat Kohli decided to bat first, but his decision did not prove to be correct and captain Kohli, who came to the opening, got out after scoring five runs. Devdutt Padikkal, who came to open with the captain, tried to handle the innings but he too got out after scoring 22 runs in 20 balls with the help of three fours.

Debuting wicket-keeper batsman KS India’s bat, who was debuting for RCB, also remained silent and he scored 16 runs in 19 balls with the help of a four. The team had high hopes from Glenn Maxwell and AB de Villiers, but neither of the batsmen could bat, both were dismissed after scoring 10 and 0 runs respectively. Sachin Baby 7, Vanindu Hasaranga 0, Kyle Jamieson 4, Harshal Patel 12 Mohammad Siraj 8 and Yuzvendra Chahal remained unbeaten on 2 runs. Apart from Chakraborty and Russell, Lockie Ferguson took two wickets for KKR and the famous Krishna took one wicket.