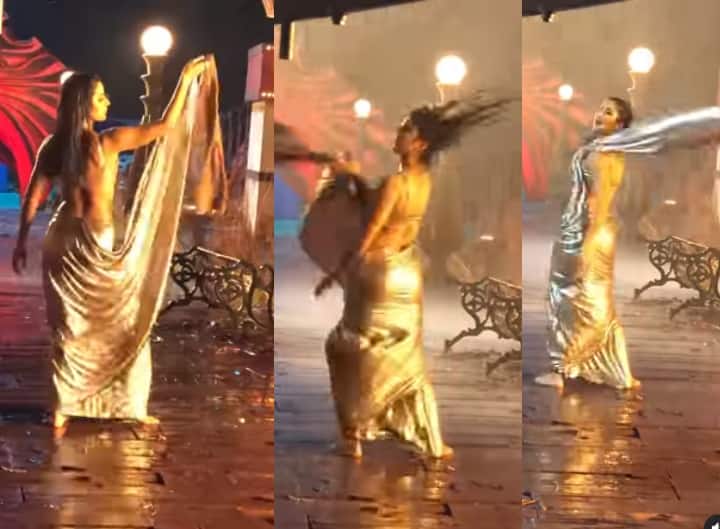 Tip Tip Barsa Paani: Bollywood actress Katrina Kaif and Akshay Kumar’s film Sooryavanshi has made a banging opening, it has proved to be the biggest hit film of the year. After Corona, she has once again returned to the box office. Along with Suryavanshi, the song Tip-Tip Barsa Pani from this film is also making a lot of headlines. Katrina’s style in this song has once again injured everyone. Katrina has now shared a BTS video of this song, in which she is waving in the gestures of choreographer Farah Khan.

Katrina has shared a video during the making of the song Tip-Tip Barsa Pani, in which Katrina is showing her moves while drenched in a golden gilt sari, while choreographer Farah Khan’s voice also comes from behind in which she is counting. There are empty roads and rain in their background. While sharing this video, Kat wrote, “It was raining my voice is Farah Khan’s voice.”

Akshay Kumar’s film Sooryavanshi was released in theaters across the country on November 5, this film is getting a lot of love from the audience. Katrina Kaif is in the lead role with Akshay in the film while actors Ranveer Singh and Ajay Devgan will be seen in guest appearances. The film is directed by Rohit Shetty. Tip-Tip Barsa Pani, the song is a superhit song from the film Mohra in the 90s, earlier Raveena Tandon appeared with Akshay in this song, Katrina Kaif has shown her moves in the new song. Many people are also comparing these two songs.

Katrina Kaif and Vicky Kaushal stopped on Diwali? The function took place at this director’s house!

Navjot Singh Sidhu was mentioned in front of Akshay Kumar and Katrina Kaif in The Kapil Sharma Show, Kapil said to Archana Puran Singh – you …