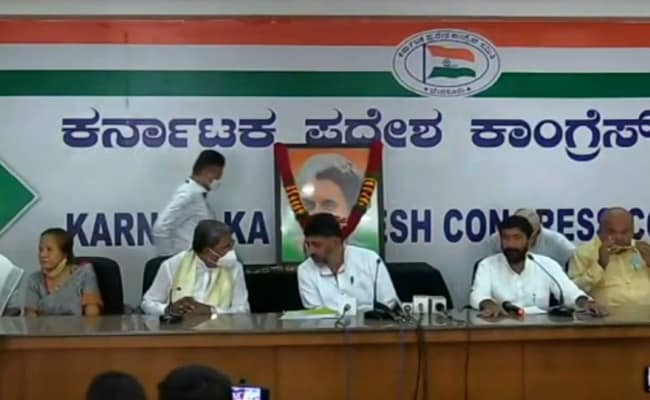 Days later, the mics caught out Mr Shivakumar (and ex-Chief Minister Siddaramaiah) at a program in Bengaluru on October 31 to mark the dying anniversary of former Prime Minister Indira Gandhi.

In a video of the change that has emerged on-line, Mr Siddaramaiah may be heard asking concerning the absence of a portrait of Sardar Vallabhai Patel, the nation’s first Deputy Prime Minister, who was born on the identical day Indira Gandhi was assassinated, albeit over a century earlier.

When informed “we never keep the photo (of Sardar Patel)”, Mr Siddaramaiah signifies concern about criticism from the BJP. Mr Shivakumar then instructs his employees to place up a portrait of Sardar Patel too.

“Today it is his (Sardar Patel) birth anniversary,” Mr Siddaramaiah leans over to remind the Karnataka Congress chief, “There is no portrait of him?”

Mr Shivakumar responds: “Sir, yes… it is his birthday today also… but we never keep the photo.”

“But what happens with BJP (is) they will take advantage of it (the Congress not having Sardar Patel’s portrait at an event commemorating Indira Gandhi),” Mr Siddaramaiah stated.

“Like we have not seen them (do it)… (turns to a staff member) Do you have a photo of Vallabhai Patel? Get it…” Mr Shivakumar may be heard.

“We will keep the photo,” he tells Mr Siddaramaiah, to which he responds: “Yes… it will be better.”

NDTV has not been capable of independently confirm the video.

The video has predictably drawn mocking criticism from the BJP, with the ruling occasion’s National General Secretary CT Ravi tweeting: “It is a shame that slaves are so much scared of an Italian” – a swipe on the opposition occasion’s chief Sonia Gandhi.

“If anyone had doubt how much the Nehru Dynasty hated Sardar Patel, this video clears it. CONgress leaders Siddaramaiah and DK Shivakumar agree to place photo of Sardar Patel along with that of Indira Gandhi fearing BJP,” he tweeted together with the video.

If anybody had doubt how a lot the Nehru Dynasty hated Sardar Patel, this video clears it.

CONgress leaders @siddaramaiah & @DKShivakumar agree to put picture of Sardar Patel together with that of Indira Gandhi fearing BJP.

It is a disgrace that Slaves are a lot terrified of an Italian. pic.twitter.com/ZiO3pUegGu

Earlier in October two Karnataka Congress leaders were caught on camera earlier than a presser.

Unaware that the mics have been reside and that they have been being recorded, they spoke about “adjustments” by Mr Shivakumar and an aide of his who “made around 50-100 crores”.

A video of the change was tweeted by the BJP’ Amit Malviya, who took a swipe on the Congress.

Former Congress MP V S Ugrappa and KPCC media coordinator Salim talk about how Party president DK Shivakumar takes bribes and a detailed help of his has made between 50-100 crores in assortment. They are additionally discussing how he stutters whereas speaking and as if he his drunk.

Mr Shivakumar didn’t deny the dialog however did deny the allegations.

The Congress responded by expelling one chief for six years and sending the opposite a show-cause discover; the latter chief, former MP VS Ugrappa later provided a clarification.