Watch: “Will Yank Your Badge If…” Samajwadi Leader Threatens UP Cop 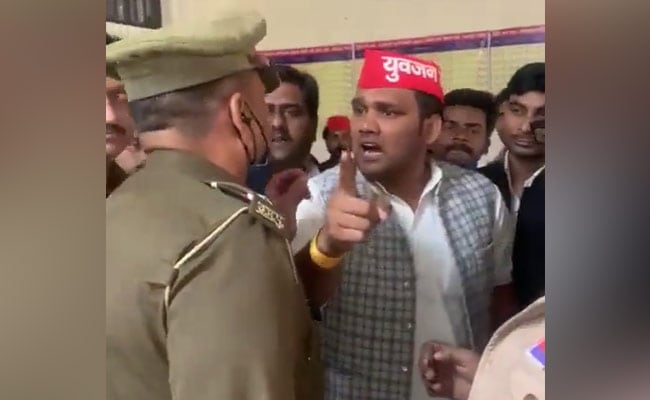 The altercation occurred contained in the Barra police station.

A video clip of a Samajwadi Party (SP) chief threatening a police officer in Uttar Pradesh’s Kanpur is being broadly shared on social media. Arpit Yadav, a councilor from SP, will be seen threatening a police officer saying “tum jhanda nochoge, hum billa nochenge (If you tear down our party flag, we will yank off your badge). SP activists were protesting the inauguration of the BJP’s Kanpur-Bundelkhand regional party office in the state and a banner put up at the site by Mr Yadav was allegedly torn down by Inspector Pavan Mishra of the Barra police station. The SP activists say that land was acquired from the Naubasta Maurang Mandi for the construction of a hospital to serve people from the southern part of the state, but a BJP office was built there instead.

The altercation happened inside the police station, Mr Yadav and his supporters can be seen warning the police officer, while other police personnel and party members intervene and deescalate the heated exchange. “Go discover out who I’m,” Mr Yadav will be heard saying.

BJP nationwide president JP Nadda and UP Chief Minister Yogi Adityanath have been scheduled to inaugurate the regional workplace. Mr Yadav, Kanpur Rural district president of Samajwadi Yuvjan Sabha, was taken into custody and an FIR has been registered towards him. He has been charged underneath Sections 147 (rioting) and 332 (voluntarily inflicting damage to discourage a public servant from his responsibility) of the Indian Penal Code.