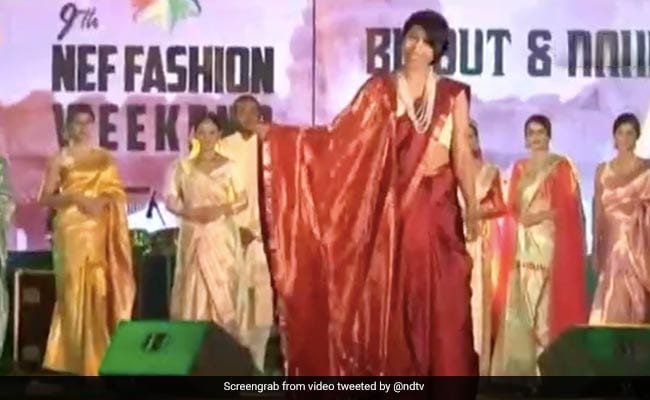 Delhi’s popular North East Festival is organised in the national capital every year at Jawharlal Nehru Stadium. However, the show got cancelled due to the rise in Covid cases in Delhi. The organisers shifted the smaller version of the ninth edition of the festival in Guwahati with limited audience.

Olympic bronze medallist Lovlina Borgohain (@LovlinaBorgohai) in a new avatar as she walks the ramp in Northeast Festival. pic.twitter.com/zFW6Q6mXMS

“The magical hands of the weavers of Assam give colour and joy to the new journey of a ‘Koina‘ or an Assamese bride. The cloth filled with smooth mulberry silk ‘paat‘ and beautiful coloured sifina and zari work gives another elegant look to it,” he said.

Mr Bhagawati and his co-designer Rakesh Chetia gave a new twist to the traditional attires worn by Assamese brides and grooms.

“The Rose Gold sifina zari work we used for Lovlina Borgohain’s dress dates back to the days of the Mughals,” he said.

Internationally acclaimed actor from Assam Adi Hussain was also present at the festival. The actor along with Ms Lovlina were felicitated at the festival for their contributions towards the region.

He further said that sudden change in the venue due to Covid crisis was a big setback, it has discouraged many sponsors, organising it in such a short notice was a big challenge.

“But yes, with support from Government of Assam, Ministry of Tourism, Govt of India we could organise it. Yesterday, Around 50 tourism stakeholders of North East including the Govts, local tour operators were there at the conference hall, but we had 300 major tour operators across the country interacting with our tourism stakeholders on the subject, NER as ideal destination post covid” Mr Mahanta said.

The evening also saw live music performances by Zubeen Garg of “Ya Ali” fame and the Cultivators band, along with Wangala dance by Garo Art and Culture from NEZCC Meghalaya, dancing drummers by the Rhythms of Manipur band among others.

(With inputs from PTI)