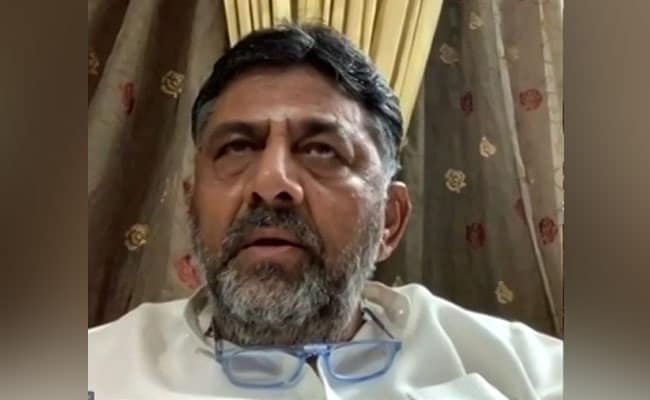 The Congress march, widely condemned at a time Covid cases are rising, was finally put on hold on its fifth day after five leaders, including Veerappa Moily and Mallikarjun Kharge, tested positive.

DK Shivakumar, who organised the Congress march, said he followed his party’s decision even though he did not agree with it. He also denied that his colleagues were infected because of the campaign, during which thousands of workers were seen marching without masks or distancing.

“These numbers are all created,” Mr Shivakumar said, asserting that neither Mr Moily nor Mr Kharge were part of his padayatra.

“Why am I so strong? Nothing happened to me? Today to respect everyone we stopped it (the Padayatra). We will continue the yatra as soon as pandemic comes down,” said the Congress Karnataka chief.

Karnataka yesterday reported a 44 per cent jump in Covid cases.

“Thousands of people participated in the past few days. Almost a lakh participated,” Mr Shivakumar said, emphasising that he had informed the state government of his programme with plenty of notice.

He also alleged that state administration officers were trying to trap him.

“People are coming from outside, they test negative and then they come here and they get positive certificate…District commissioners who are positive came to meet me. They are trying to trap me

The Congress leader went on to accuse the BJP of violating Covid rules with an oath ceremony in the state assembly or Vidhan Souda. “Why couldn’t the BJP set an example? You are questioning only the Congress padayatra,” he snapped.

On reports that Congress leader Rahul Gandhi asked him to drop the march, he said: “I don’t want to take the names of my leader. We have discussed this internally. I don’t want to discuss. Definitely, my leaders have given me some indications and I have to respect that. I have discussed this with party colleagues. It is a collective decision. Though my individual decision was different.”

Sources in Mr Gandhi’s office said he has not played any role.

The Congress launched the march to push the state’s BJP government on the Mekedatu project close to the Tamil Nadu border. Tamil Nadu has challenged in court Karnataka’s plans to build a dam to conserve water during floods and bring the water to Bengaluru, about 200 km away.

The Congress had planned to end the 139 km-march in Bengaluru, but were barred from entering the city.