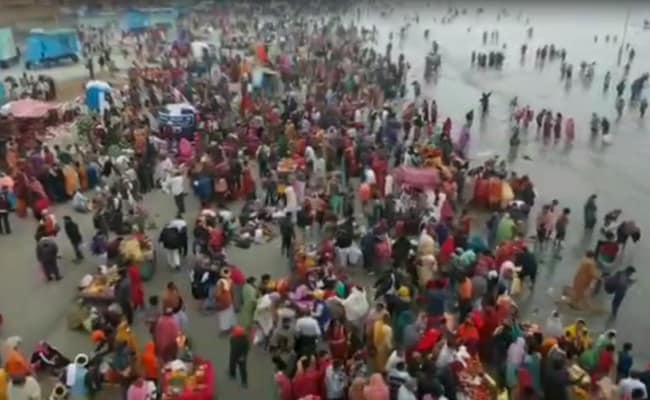 The celebrations come at a time when Bengal is struggling with mounting Covid cases.

As Makar Sankranti celebrations commence, lakhs of devotees are seen taking part in the Gangasagar Mela in West Bengal’s Sagar Island, even as Covid cases surge in the eastern state amid the country’s third Omicron-driven wave, during which India’s coronavirus cases have multiplied 30-fold within a month.

Visuals depict hundreds of thousands — many of whom were maskless — taking a holy bath at the confluence of the Ganges and the Bay of Bengal, as well as playing festive music on the banks of the river, as lakhs of devotees from across the country arrived in the South 24 Parganas district to participate in the Hindu pilgrimage.

The celebrations come at a time when Bengal, like much of the country, is struggling with exponentially mounting Covid cases. On Thursday, Bengal reported 23,467 fresh Covid cases in 24 hours, a jump of 1,312 infections from the previous day’s daily cases.

Just earlier this week, on Sunday, Bengal reported an all-time high of 24,287 fresh cases of Covid-19, the highest daily case count in the state since the pandemic first began in 2020. This was following Bengal’s worrisome start to the new year, where, by January 2, the state’s daily Covid cases had shot up by eleven-fold within a week.

The positivity rate in the state also rose to 32.13 per cent from 30.86 per cent on Wednesday. This number is significantly high in comparison to the nation’s overall positivity rate of 14.78 per cent, as of Friday morning.

Apprehending that the state may witness a surge in the number of Covid-19 cases in the state on account of the upcoming festivities, West Bengal Chief Minister Mamata Banerjee on Thursday said that the administration is well prepared to tackle it.

A Calcutta High Court division bench comprising Chief Justice allowed the annual fair to take place from January 8 to 16, and ordered that the entire Sagar Island be declared a notified area. The bench also constituted a two-member committee  to monitor adherence to Covid norms at the massive gathering.

These norms include ‘Covid-safe’ drones, which were seen buzzing over devotees, spraying them with holy water as they chanted, in a sanitary twist to the traditional bath. Further, only those having a negative RT-PCR report within 72 hours have been permitted to take part in the festivities.

However, countless pilgrims were seen immersing themselves in the Ganga regardless. “We have arranged for sprinkling of the holy water from drones so that there is no crowding…but the sadhus are bent on taking the dip. We can’t prevent them,” said Bankim Chandra Hazra, the Bengal minister in charge of organising the Gangasagar Mela.

Expressing concern it will become a “super spreader” event, doctors had earlier appealed to the state’s High Court to reverse the decision to allow the festival this year, to no avail. Given the known dangers associated with the event, the state government has come under fiery criticism for giving the annual mela the go-ahead at all.